“…science fiction is more than a literary genre or a social passion. It is a way of organizing the mind to include the contemporary world…SF is an art that delights in vision, intelligence, and the infinite possibilities of change.” 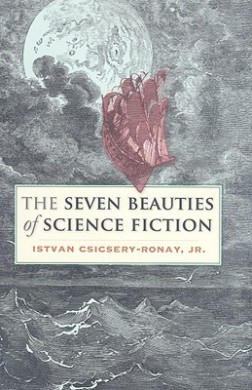 My overall impression of this book was that it was trying so hard to be exclusive and elite that it almost became nonsensical. Yes, I understand that it contributes to a larger conversation. However, if you look at Joanna Russ’s discourse on feminist science fiction, or Sterling’s, LeGuin’s, and Atwood’s nonfiction writing as a writer-critic, or even Auerbach, Marx, and Bakhtin (all names with whom Csicsery-Ronay Jr claims to be ‘in conversation’) they are still trying to reach the public and actually have a discourse. When you purposely make yourself so inaccessible, you might as well be ranting in a dark room, in solitary confinement. It was clear to me that he wanted to fit into the ‘philosophy’ department more than the literary analysis and criticism department, or the literary studies in general. In some sections, he over-complicates topics that are so simple with his verbose and restrictive writing style. For instance, in the section on fictive neology, the entire passage sounds like an anthropology paper on humans as an overview. “Languages have an inherent potential for development through their interaction with the discourses of other cultures and their own internal elaboration.” Yeah…we know. You’d find yourself reading pages upon pages of just common sense knowledge told in a restrictive style. I also found this work to be limited by the few sci-fi works that Csicsery-Ronay has read. While he references certain things here and there from a wider range, he goes into detailed discussion on only a few works (but almost the same ones in every chapter). You can tell he’s definitely (properly) read Solaris, the Kim Stanley Robinson books, few works by Ursula K. LeGuin (if not one) and some of the 19th century classics…but there are so many other works to consider (especially when this was published in 2008). I think he barely dips into science fiction works, extracts a very superficially well-known theme and then starts ranting about it in a way only Philosophy students would understand. This becomes crystal clear the moment you encounter chapters dedicated to Kant, Adorno, and Burke.  Sometimes he just name-drops titles without even discussing them, to get them to fit into his ‘totally-unrelated-to-sf’ thesis.

Those two frustrations aside, the book gets good once you get used to his use of language about mid-end of chapter one. Once he begins to engage with science fiction works (though few) I actually really enjoyed it.

The title for this work is inspired by the medieval Persian allegorical romance The Haft Paykar—a tale of mystical love and moral enlightenment, in which a prince falls in love with seven beauties and upon visiting each of them in a week, each bride tells him a new allegorical story. Istvan Csicsery-Ronay Jr. appropriates the seven beauties to the form of “categories” found in science fiction (which he calls science-fictionality)—of which one work may contain several.

This work is not expository or historical. It is a theoretical model of criticism and responding to a rich discourse about the genre. While there are many literary critical lenses through which to examine sf works (feminist, Marxist, etc) Csicsery-Ronay Jr. approaches sf as (what he ‘simply’ describes as):

“a product of the convergence of social-historical forces that has led to the current global hegemony of technoscience, and as an institution of ideological expression on one hand, and on the other, the ludic framework in a culture of game and play in which that hegemony is entertained, absorbed, and resisted.”

The author explains that he wanted to interact with sf works and read closely while trying to not to border on the banal by using popular works, nor slip into obscurity by addressing texts that deserve a wider audience. A great difficulty arises when he wanted to be inclusive of non-Anglo sf works, while the SF genre is predominantly an Anglo-American genre. These are the seven ‘beauties’ or categories he discusses at length (I am paraphrasing some from the way Csicsery-Ronay Jr introduced them, with some examples that were memorable to me):

“Where modern adventure narrates the projection of discovery and invention further and further away from the home base, the metropole and the ‘motherland,’ into exotic venues, the Gothic imagines the subject position of the victim of these cognitive interests…the field of values is reversed…the Gothic inverts the dream world of thrilling travels among wonders into nightmares of abduction, imprisonment, and victimization by barely controllable archaic passions.”