For the long weekend, I took a brief trip to NYC and explored several bookstores and the exhibition at the Morgan Library: Tennessee Williams No Refuge but Writing, hosted in the Engelhard Gallery. Only a quick glimpse demonstrated what a huge collaboration this exhibition was. Manuscripts were brought from the Harry Ransom Center, Columbia University, New York Public Library, Harvard, and many others, with the collaboration of many librarians and curators. The exhibition was made possible by generous donors, and it is exemplary work by the librarians and curators at the Morgan Library. Walking through the exhibition I felt absolutely inspired! Inspired to write, to learn, to read, to live! The way the exhibit was set up, the information provided, the research done, all was put together so well that—in my mind at least— it brought Tennessee Williams back to life.

The way my high school English courses were set up, and coincided with my theater classes, I accidentally had to read A Streetcar Named Desire about five times—not only read it, but study it, memorize it, and write several essays on it, as well as performing parts of it on stage. In undergrad I studied The Glass Menagerie, and this put me on a bit of a Williams crusade. His tragic female characters who cannot let go of an idealized past, his confrontational men who are mere bullies incapable of understanding the delicate nature of their sexuality, in addition to the intensity of the plot—are absolutely unforgettable. 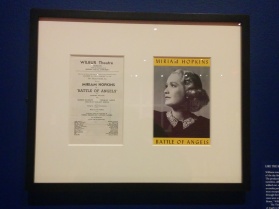 The way the exhibition is set up we get glimpses into Williams’s life in chronological order. Artefacts include one of his many typewriters, keys he collected from hotels, manuscripts and first drafts of his plays, elaborate plans for some of his character development, as well some of his well-deserved awards. Because Williams wrote on the cusp of the Golden Age of Hollywood, there are many playbills from Broadway, images of Elizabeth Taylor, Vivien Leigh, and Marlon Brando, and posters/still images of these great actors playing a role in one of his many plays.

Tennessee Williams’s inner life, however, was most intriguing to me. On display was a letter Williams sent to his grandfather explaining how anxious he was for receiving a grant from the Rockefeller fellowship, the ways in which he based Belle Reve (the location from which Blanche arrives—the idealized past) on a poem he wrote many years prior, the way he dissects Blanche’s character and psyche before writing her into dialogue, and his many oil paintings. This was new information to me—I had no idea Williams painted—in a style I very much admire. His painting style resembles a cross between Cezanne and Van Gogh—a form of expressionism/impressionism but with a flat brush. I remember a moment from Streetcar where he went through a lot of trouble to outline the setting by means of a painting:

“There is a picture of Van Gogh’s of a billiard-parlor at night. The kitchen now suggests that sort of lurid nocturnal brilliance, the raw colors of childhood’s spectrum. Over the yellow linoleum of the kitchen table hangs and electric bulb with a vivid green glass shade. The poker players—Stanley, Steve, Mitch and Pablo—wear colored shirts, solid blues, a purple, a red-and-white check, a light green, and they are men at the peak of their physical manhood, as coarse and direct and powerful as the primary colors.” (Streetcar Named Desire)

According to one of the information panels next to his drafts of Streetcar, Williams got the idea for the play when living in New Orleans with his new lover Pancho Rodriguez where he famously wrote:

“’I was and still am Blanche…[although] God knows I have a Stanley in me, too,’” drew on their tumultuous relationship for the play. This he wove together with elements from earlier poems, shorter plays, and character studies to draft and redraft The Poker Night, the immediate precursor to A Streetcar Named Desire.”

Clearly, he drew a lot from Van Gogh’s art and allowed it to guide the poker night scene which became the heart and beginning of his most famous play.

His typewriter (one of them)

Lastly, and what I found most interesting, was the way Tennessee Williams regarded writing as a kind of madness. In a diary where he noted anxieties about his play Cat on a Hot Tin Roof, which he feared was a failure, he wrote:

“I love writing too much, and to love anything too much is to feel a terror of loss: it’s a kind of madness”

Then, below the typewriter on display The Morgan Library wrote:

“Two of Williams’s most important possessions were his copy of Hart Crane’s Poems (also on view) and his typewriter. As a young man, he would write through the night, seeming to subsist on strong black coffee and creative expression alone. Even at his poorest, when his typewriter was seized by his landlady, he borrowed one. When he pawned the borrowed typewriter, he found another and promptly spent 15 cents of his last $2.00 on paper. ‘I must be mad,’ he wrote in his journal, ‘It’s all a little too much, too much.’”

It was so interesting to see it all laid out and to get so close to his handwriting, and most prized possessions. The exhibition will be on at the Morgan Library until May 13, 2018, so if at any point you find yourself in New York, try to see it if you can. If not, the exhibition has been put together in a library catalog titled Tennessee Williams No Refuge but Writing, which is available for purchase online.

Note: all pictures above were taken by me (no flash) at the Morgan Library, and are the property of the sources listed in the opening paragraph. According to their website: “Images may be printed out for study, or downloaded for presentations, dissertations, or non-commercial websites or blogs.”

I think I’m a bit young to count any book as “tradition for Christmas” but there are two books and two short stories that I’ve made sure to read as often as I could around the Christmas period. My #1 rule is that the “Holiday Season” doesn’t begin until after Dec 10. Decorating the day right after Halloween is a little unsettling.

Making Christmas all about buying things in high consumerism anxiety, followed by Black Friday videos trending, and making this madness last from November 1 is something that takes away so much magic from Christmas for me. I was recently sent a mini list by Julie Morris, who wrote on the importance of being reflective on the presents you buy for yourself and others around the Christmas period, and the value of reflecting on how those gifts will improve our lives and those of the people around us. Here are some of the recommendations for more thoughtful gifts, if you are looking for ideas. I personally found it to be useful.

It’s always great to try and improve your life in any way that you can. Asking for gifts that can help, rather than needless knick knacks, is a great way to start on your new resolutions. Consider sharing these ideas to help get your new year on the track.

My #1 Novel for Christmas and favourite depiction of Santa Claus was written by Frank L. Baum: The Life and Adventures of Santa Claus.  This book is amazing. I love the mythological layers added to Santa. In this version he was raised by woodland creatures and fairies. It’s almost a bildungsroman where we get to see how Santa becomes who he is, and how he became immortal. The movie is an excellent adaptation as well. 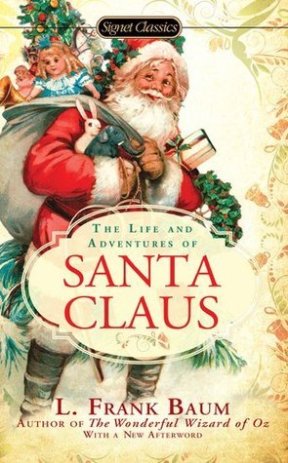 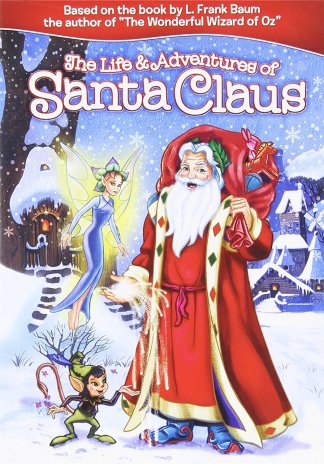 Then there are these two stories by Hans Christian Andersen

So far I think I’ve read “The Little Match Girl” every year since I was six years old. It’s one of my absolute favourite stories of all time. I love this story so much I started illustrating it:

Then, there’s  Dickens’s novella A Christmas Carol. Yes, everyone reads it, but it’s pretty darn good. Also, it kind of makes you reflect on the year and the resolutions for the new one. I am the proud owner of many Charles Dickens Christmas stories 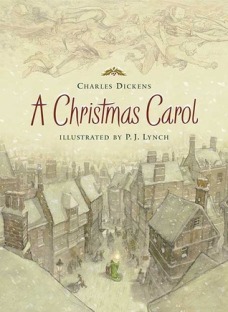 Lastly, there are works that are not necessarily Christmas related, but they are personal associations with Christmas. For many, it’s a tradition to watch Harry Potter, The Nightmare Before Christmas, Home Alone, or Elf. Some associate Apple Cider, or Egg Nog with Christmas; particular tastes, and particular smells.

For me personally, Christmas means:

The smells of Christmas

Books (non-related to the ones mentioned above): The Adventures of Sherlock Holmes

Movies I really enjoyed around the Christmas period: How the Grinch Stole Christmas, Peter Pan (2003), Little Women, Meet Me in St. Louis  and (recently added) Frozen. I also watch adaptations of the three main books/stories mentioned above, or Winnie the Pooh Christmas movies.

Lastly, I absolutely HATE every Christmas song, carol, and/or melody. I think they are so depressing (I’m sorry). I have seen wonderful performers, and family members sing them beautifully, but the melodies themselves put me in such a sad state of mind, I can’ t do it. (Let’s call it a quirk?)

To me, Christmas means the mythology of Santa, the coziness of winter, where the snow is a blanket over dormant parts of nature, and there’s good food, loving family, and a fire place. I want to feel cozy, comfortable, and safe, but I don’t want to experience the layer of sadness that also descends upon Christmas, which comes from the grayness in the atmosphere and from the Christmas songs (for me personally). I know that this is different for everyone and each individual experiences Christmas differently but every year I can’t ignore that there is a general sadness around this time. This feeling turns into optimism and excitement for the new year with plans, hopes, and new dreams. Life is about balance so I guess we need both feelings to get by. I hope that you will have a lovely Christmas time this year and no matter what happens, you get to enjoy at least a great short story! 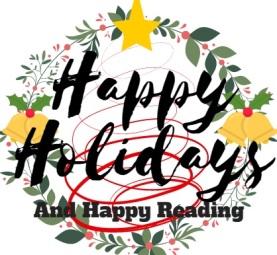 “Alas, poor Yorick! I knew him, Horatio: a fellow. of infinite jest, of most excellent fancy“