“Ricardo de Avila would have followed Coronado to the ends of the earth. Instead, Ricardo found the end of his mortal life, and a new one, as a renegade vampire-conquistador.” 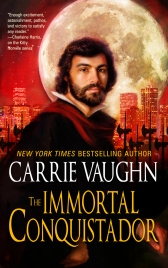 The Immortal Conquistador is the 15th installment of the both collaborative, and (mostly) Carrie Vaughn’s Kitty Norville series—an urban fantasy series with werewolves and vampires–just what the doctor ordered. This book contributes greatly to the world-building components of Vaughn’s series as it provides a background on Rick the vampire’s origin story.

Set in Rome and Mexico City, we follow Rick struggle with becoming what he hates most, and dealing with components of his conditions and learning to accept them. Rick witnesses the history of western civilization in some of its most gruesome moments and must continue to live with all this knowledge. There is a lot of time hopping in this book but once you get into it it’s very easy to follow. This book leaves a lot of room for development and as it is only an installment I think we’re going to see a lot more of the characters present in The Immortal Conquistador.

What I love about Vaughn’s writing is that she takes you on a fun adventure and secretly sneaks in layers of complexity to her characters where you find yourself thinking about them for days on end. I can’t wait to see where this series is heading!

This book will be released in March by Tachyon Publications. 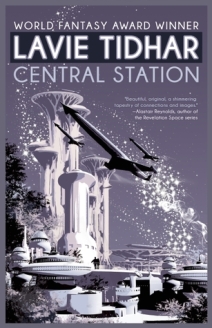 Lavie Tidhar’s Sci-fi Novel Central Station is one of the six on the shortlist for the Arthur C. Clarke Award, was a finalist for the Locus Awards, and only two weeks ago has been awarded the John W. Campbell Memorial Award for best science fiction of the year.

The composition of Central Station is known as a ‘fix-up’ novel, meaning that several stories that have been published in the past (in this case ranging between 2011-2015) have been brought together along several new added chapters to form one cohesive narrative.

In its essence Central Station is an in-between place, similar to an airport and/or port located between Jewish Tel Aviv and Arab Jaffa. We learn that trades and cargo play a huge role in this distant future, even on a spiritual level:

“Cargo came from everywhere. In space, cargo was a religion all by itself. It came from Earth, shipped up to orbit, to the massive habitat called Gateway. It came from Lunar Port, and it came from the Belt, from Ceres and Vesta where the wealth of the Belt poured.”

The location is the core of the novel because it’s the only thing all the characters have in common. In the prologue an author sits down and writes of a civilization in the future imagining and reminiscing of the past (which is still quite distant from us and what we know). The term often used is the “imagined past.” It reminded me of one of those notebooks that certain hotels or locations make you sign every time you visit. It’s as if all these species of ‘people’ from the future (from all over the Solar System) get to sign their names at Central Station and tell their story.

Every chapter focuses on one character and is told from a different perspective, and the same character will re-appear in future stories as a secondary character. What is astounding is that even though all these species of the future are so different they seem to be a lot more tolerant of each other and understanding than humans are now. They look to us and our history the way we look at Cavemen. There are a few characters that dominate the naraative, mainly Miriam (Mama Jones), Boris, Caramel, and Kranky.

What amazes me is that Tidhar managed to create entities so different from us and somehow breathe air into their lungs and humanize them giving them relatable cravings and vices. The story I found most fascinating was that of a creature called “Strigoi” which we follow in chapter five, by name of ‘Caramel.’ Strigois are data vampires and absorb everything one knows. We follow how Caramel herself became a Strigoi and what her feelings were being at Central Station:

“she had never imagined the Conversation as she experienced it just then –the nearness and yet the distance of it, the compressedness of it all. Billions of humans, uncounted billions of digitals and machines, all talking, chattering, sharing at once. Images, text, voice, recordings, all-immersive memcordist media, gamesworlds spill-over—it came on her at once, and she reeled against it.”

When she meets Boris and Miriam at Central Station her parasite-like nature is viewed by Miriam as a disease, something Caramel can’t help similar to the ways we look at depression or Schizophrenia. There is a sort of dangerous aspect about being a Strigoi but also involuntary on their part. For Boris, Caramel is a sexualized entity. He is

“aroused by her difference…all the while knowing his own weakness, admitting to his sexual infatuation with her, this human kink that made them lust for Strigoi, for the thing that could harm them.”

To me this story is representative of the whole. Tidhar takes something so distant from us and makes it relatable. As readers we empathize with the non-human and that is the result of great craftsmanship and storytelling. I absolutely love this book and I will read it again soon.

Also, the cover art for this novel is so beautiful. This is the work of Sarah Anne Langton.

I recommend this novel to anyone who enjoys science fiction. To learn more about Lavie Tidhar and his other works click HERE.

I received a digital copy of this novel from Tachyon Publications in exchange for an honest review (thank you Tachyon!) however I bought my own copy and an audible version. I hope it’s come through that I genuinely enjoyed this work. It brought me to a good place and I will take a look at Tidhar’s backlist and forward to his future publications.